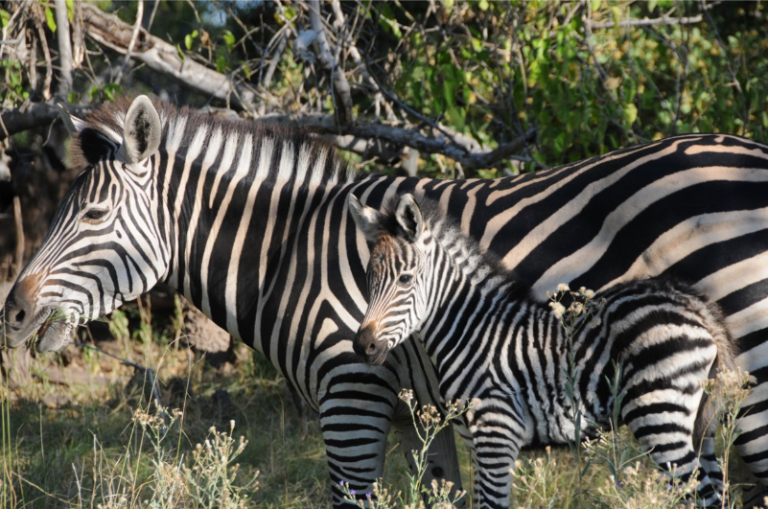 Okavango Delta, Botswana 2019
Alex tells us about her amazing Journey to Africa.

Outside the tent, under a full moon, the curious hyena crept slowly past, sniffing for leftover food.

Nearby, a lion roared, trying to locate his pride.

At the waterhole, a hippo bellowed, playing in the shallows with her baby.

A herd of elephants moved quietly through the shrub.

Closer to me, a human snored loudly, content in his tent with a belly full of food and tired out from a full day of game viewing on safari.

We had come face to face with the hyena earlier in the night, through the tent window, my partner Steve and I were glued to the mesh as it sniffed around and walked by, it’s coloured fur and dog-like face illuminated by the full moon.

The next morning, one of our group discovered his shoes had been nibbled on by the opportunistic hyena, a timely lesson to keep all belongings inside the tent in future!

After some toast and coffee prepared by our wonderful camp chef Bufana, we climb into the Land Cruiser. It was 6:30am, and the full moon was still up in the West, with the sun rising in the East. As we set off from camp we watched as a large group of hippos played in the lake, the large full moon above reflecting on the water with an array of colours in the sky. Overhead, a group of birds flew ‘through’ the moon, a photographers dream!

We drove on to find a leopard stalking through the long grass on the plains– this was day 3 of our safari and we’d seen a leopard every day; these are traditionally one of the most difficult animals to spot, not so in Botswana on this occasion! We certainly never got tired of watching them, and the excitement of seeing the fourth was the same as the first.

What happened next can only be narrated in an Attenborough voice – our first sighting of lions this trip – a group of doomed impala in an area that we later went on to call ‘the arena’ – a lioness on the prowl while male lion watched on, waiting to eat the spoils. To witness a “kill” on safari is not something that everyone gets to see, with big cats often hunting under the cover of darkness. In lion hierarchy the lioness does the hunting and the males eat the spoils – we witnessed just that as the lioness took down an impala.

Later on that afternoon we watched as two male lions chomped down the spoils of the lionesses hunt that morning, and we saw one of the males fighting her to keep her away from the food – another ‘Attenborough moment’!

As the sun set that afternoon, we cracked a beer from our on board car fridge and toasted to a very memorable day. Back to camp for a delicious meal, roasted on the camp fire and finished off with a chocolate coated banana for dessert. We debriefed on the day around the camp fire, drinks in hand, listening to hippos calling in the distance.

This was my second time in Africa; for my first visit I stayed in the comfort of a beautifully adorned safari lodge in Madikwe Private Game Reserve in South Africa. I was curious to see how the camping trip would compare to the luxurious lodge experience I’d had previously.

There were times during our camping safari where I missed the creature comforts of the lodge, such as air conditioning, swimming pool, comfy lounges, particularly in between game drives when we were back at camp in the heat of the day and the tent was too hot for a siesta (there was always a shady tree to be found though!). I have to say though, that I am sold on the camping safari; the lodge was lovely but I think that camping is a fantastic and very authentic way to really get amongst the action of the African bush and get up close to the wildlife.

Experiencing the silence of the bush at night, sleeping under a starry sky, hearing animal noises at all hours of the night, hyena encounters, outdoor showers under the stars to name a few. The rare pleasure of no wifi or phone reception, where everyone is present in the moment and truly taking in their surroundings, sharing safari stories together with new friends over a glass of wine around the campfire is a memory to treasure.

The verdict? So long as you have a sense of adventure – we had two flat tyres, got the safari car bogged in the sand twice, and had a couple of long days on the road with many a bush/tree used as a substitute toilet – and can live without wifi, then I definitely recommend camping in the African bush. No fences, no wifi, no worries – Hakuna Matata!